Selecting the power range of a rifle scope most of the time boils down to personal preferences. But if you’re a new shooter, being unaware of a scope magnification distance chart may not give you the most pleasant experience with your sighting device. The basic rule of thumb for every shooter: 1x per 100 yard. 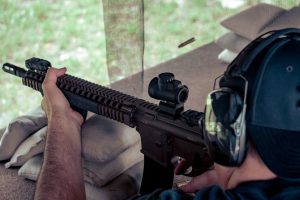 This has been the general advice for some time. So in that case, you might be able to shoot a game at 800 yards away with an 8x magnification. But then, it’ll better help to be aware of the relationship between magnification and shooting distance. Let’s discuss that in more detail.

So, is more magnification better? What power do I need based on shooting distance? What magnification is for what application? Let’s answer these questions and more in today’s article.

Magnification is an optical device’s ability to enlarge an object at a distance; the higher the magnification, the larger the image of an object will become.  There is a wide range of magnifications for rifle scopes. Some of them offer a higher magnification that can make you feel closer to the target as you can see it closer, too.

But remember, as you increase the magnification, the more distorted the image you’ll also get.  So at a long range, you might struggle to shoot your target if it appears blurry for your eyes to see. That’s why rifle scope manufacturers include a scope magnification distance chart to help you determine the distance you can see without major image distortion.

Is Higher Better? The Issues with High Magnification

As you increase the magnification, the more light bending ability your scope should have. To improve the scope’s light gathering ability, manufacturers make thicker lenses for the scope. However, some of the light will still be absorbed as it passes through a lens – which doesn’t really transmit all the light. Scopes with higher power typically will be problematic in terms of transmitting light. In this case, the image will appear dimmer with a higher magnification.

Bulk in the scope

Adding more weight to your rifle is another caveat of a higher powered rifle scope. As I’ve said, scopes with a higher range of magnification will typically have a thicker lens. They’re also commonly longer and with more lenses. You’ll get a heavier scope, then.

The light becomes spherical in appearance rather than flat as it is bent and refracted in your scope. It is near the scope’s center at the crosshairs where the sharpest focus is.  The blurriness of the image will be more obvious at its edge with a higher magnification.

High power scopes can be problematic in terms of prism effect, which can lead to image distortions as well as color changes and glinting. There can also be blurriness at the image’s edges.

How to choose a rifle scope’s magnification?

Let go of the thinking that the higher magnification in your scope will give you the most of your hunting or shooting experience. Think about your shooting style and consider the distance you’re shooting at.

The same principle is to use in long range or competition shooting.  Use a scope magnification that will best fit the application you’re using your sighting device for.

Then, you also need to factor in the kind of shooting you’re doing. It is as important as choosing a rifle scope for the rifle you’re shooting. Are you hunting at short, medium, or long distances? Are you into long-range shooting?

And still at the end of the day, choosing a scope’s magnification is a matter of personal preference. You must go for magnification that you’re most comfortable with and that gives you the clearest quality of the image/target.

Now, what’s the longest shot you’re anticipating? If you routinely have to take shots that range out to at least 500 yards to take a game, this will also add up to the question on what scope magnification you’ll need.

Magnification also becomes an issue for competitive shooters who need long-range shooting accuracy.  They need to factor in a distance at least 1,000 yards, which makes it really challenging to see a target clearly.

Select the magnification power after considering some factors like shooting distance, style, and application. This will be able to help you choose a rifle scope that can offer you with the right power to take on a game or improve shooting accuracy at competitions. And at the end of the day, use the magnification that will provide you with the clearest sight picture of your target. After all, clarity of the image is what matters – it should appear as clear to your eye to increase your shooting accuracy. And of course, always remember “more magnification isn’t always better.”