A low power variable optic (LPVO) refers to rifle scopes with a magnification range starting with a true 1x on the low end, but they can go up to a magnification of 10x.  But, what LPVO has the best 1X? This is a question we receive quite often on this website.  Today, this is exactly what we’re answering and more for your information. 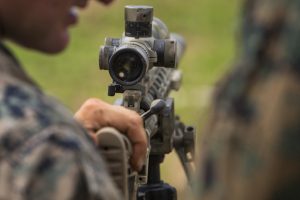 What is a low power variable optic?

A low power variable optic is a scope that is commonly distinguished for its unique look having a large ocular lens and eyepiece along with a narrow objective lens.

But to distinguish an LPVO further, let’s talk about magnification. Common LPVOs on the market right now are those with a power range of 1-4x, 1-6x, 1-8x, and some 1-10x. The most popular power range is the 1-6x for LPVOs.

The magnification of an LPVO has the primary purpose of helping shooters and general users achieve faster target acquisition and a more accurate shooting.

Many LPVOs don’t have a higher magnification level as traditional rifle scopes do because they’re designed and made to strike a balance of sufficient magnification and good eye relief.

Eye relief is significant for this type of scope because it’s created for users who want to get the best of both worlds offered by a higher powered scope and a red dot sight.

This scope should give you not just the ability to acquire your target fast like a red dot but also to offer you with sufficient magnification as you’d typically get from a traditional shooting rifle scope. And what makes an LPVO unique is its good eye relief as well.

Advantages of the best 1x LPVO

So, you’re probably asking why choose an LPVO versus another optic? This depends on the application.

If you need quick target acquisition and magnification at the same time, which you’ll normally get from a red dot and traditional higher powered scope combined, then an LPVO may definitely be for you.

People in 3-gun competitions choose an LPVO because it delivers the performance they need like an extended reach.

In addition, it’s a good scope for hunters using it for within the 500-yard shooting distance.

This low power variable scope also works perfectly if they are aiming at fast moving targets and using it for close quarter shooting.

It has the versatility and power to deliver 1x performance that can offer them with a very wide field of view (FOV) on 1x, allowing them to acquire targets faster.

This scope also gives you more aiming options when compared to any traditional optics used for tactical carbines, such as red dots.

These benefits are combined into an excellent optical solution that gives the advantages offered by higher powered rifle scopes and red dot sights. LPVOs give you unmatched performance in precision work, close shooting, and mid range targeting as well.

Today, a lot of LPVOs are becoming more popular not only for professional end users but the general gun owner/users, too, especially when different optical designs and more advanced reticles have been introduced to the market.

Hunters have also been using LPVOs for hunting in locations where they have limited shots because of the thick cover around them.

The best 1x scope also lets them locate their target faster along with its first focal plane (FFP) reticle, which helps a lot for precise holdovers no matter the range (on select models).

Nevertheless, they choose an LPVO whether they’re shooting style needs a quick focusing reticle or want flexibility of their carbine.

What magnification is best for LPVO?

If you’re using it for tactical work, maintain it at 1x power for fast target acquisition. This will allow you to react to threats in the close range and locate your target faster.

What are the benefits of an LPVO scope?

There are many benefits of it as discussed earlier.  An LPVO can work like a red dot reflex sight when set at 1x, giving you a wider field of view and an ability to target faster when compared to a higher powered scope. In addition, it allows you to zoom in even when used at a higher power in order to identify targets at a longer range.

What LPVO do Special Forces use?

They use the Nightforce ATACR 1-8X24 that offers an adjustable magnification range, allowing them to reach out and target faster or the ability to adjust it easily again for close range shots.

What LPVO do Marines use?

Can you shoot with both eyes open using an LPVO?

At true 1x power, this LPVO will have similar magnification like your normal eyesight, allowing ease of use even with both your eyes open.

How far can a LPVO shoot?

It is good for shooting close range to mid-range distances, so it is chosen by shooters who love versatility in their scope that can be used for different applications, such as close up, fast action shooting, and mid-range shooting distances.

So, what LPVO has the best 1x?

This depends on your personal preference. For low power variable scopes, we picked the following, as they have the best 1x in the market. We’ve put up a buying guide and reviews about them here as well.

Can You Hunt With A LPVO?

Mr Miller has been collecting firearms since he was 23 years old. Miller acquired even more firearms after serving in the military. He now enjoys shooting and writing about his guns. He spends the most of his time on Military Network with other gun aficionados. Miller has also trained with and is a member of the USCCA.